In “IRS Besieges Family Controlled Banks,” we discuss proposed regulations that could have far-reaching and punitive consequences for family-owned banks.

In “Q3 2016 Bank M&A Scorecard,” we review current trends in bank M&A and discuss the impact of loose-lipped politicians.

On August 4, 2016, the United States Department of Treasury and the Internal Revenue Service launched an attack on family businesses by proposing regulations that would substantially increase the effective estate and gift taxes on transfers of family controlled private business interests among family members. If adopted as proposed, upheld by the courts, and not overruled by Congress, these regulations will undercut the stability and productivity of family businesses, including community banks whose owners include family groups with multi generational commitments to community banks and the areas that they serve.

Currently the five largest banks in the United States account for 45% of banking assets, up from 25% in 2000. The Treasury-IRS attack will motivate further shrinkage in the number of community banks, the share of the economy that they serve, and the percentage of customers who have any sort of personal relationship with a banker, the type of relationship that is a necessary condition of high quality individual services and the success of small and middle market businesses. Shrinkage will occur because community bank shareholders will have a greater incentive to vote for the sale of their banks to larger banks and give cash rather than bank stock to future generations.

The proposed regulations purport to eliminate for gift and estate tax purposes the reduction in value of minority interests in private businesses owned by family groups resulting from the lack of marketability of such interests and the lack of control due to minority status. The lack of marketability discount is eliminated by imposing the hypothetical assumption that, notwithstanding provisions of state law or private agreement to the contrary, the holder of the interest has the right to sell the interest to the business at its pro rata share of the fair market value of the assets of the business less the fair market value of its liabilities (or liquidation value without regard to expenses of liquidation or taxes resulting therefrom). The minority discount is eliminated by imposing the hypothetical assumption that members of the family group which together control at least 50% of the decision making power for the business will vote together to take whatever action is desired by the family member holding the interest being valued.

The assumptions mandated by the proposed regulations are unrealistic, contrary to the way most families interact, and will result in estate and gift tax valuations substantially higher than justified by real world economics. Other commentators have suggested that elimination of the lack of marketability and minority discounts could result in increases in the taxes due on gift or bequest by as much as 50%. Transfers of interests in family owned businesses will result in higher taxes than transfers of interests in private businesses where the transferor’s family does not have control. Penalization of family business ownership could have significant adverse consequences for U.S. economic growth which has been lagging recently in any event.

Since 1968 Jim White has advised businesses, individuals, nonprofits and municipalities on a wide range of financial matters. He founded Porter White & Company in Birmingham in 1975 and presently serves as Chairman. Jim can be reached at (205) 252-3681 or jim@pwco.com. 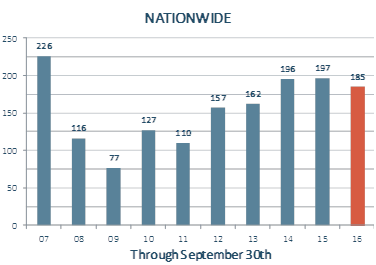 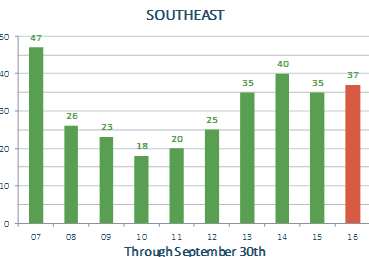 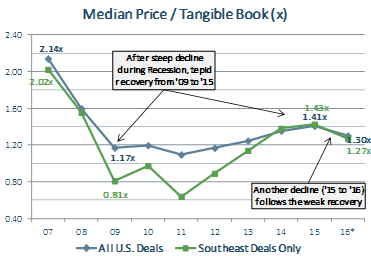 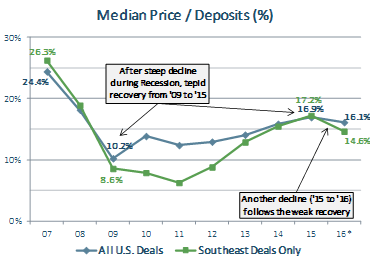 *2016 pricing is through September 30th. Southeast: AL, AR, FL, GA, MS, NC, SC, TN, VA and WV. Note: Price-Earnings multiples not shown due to the abnormally high preponderance of sellers with little or negative earnings in the 2009-11 period.

Why Have Multiples Declined?

If your bank is a potential seller, you are probably not thrilled by the less than stellar recovery in deal multiples since the Great Recession. As noted previously, the tepid recovery has actually reversed since 2015. What explains this drop?

The first place to look is bank stock prices, which are typically thought to be somewhat correlated with (and perhaps even a leading indicator of) M&A pricing. Have bank stocks declined since 2015 like M&A multiples have? 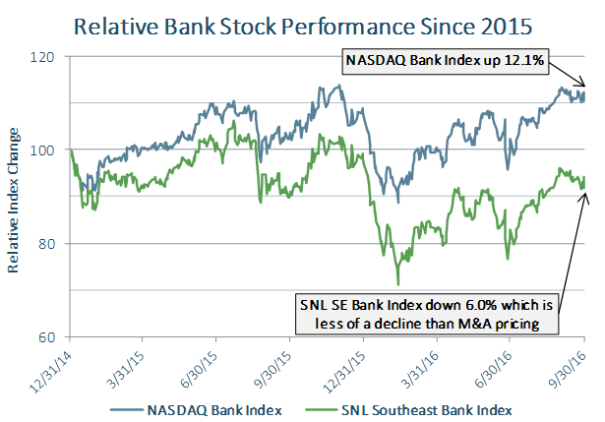 What does this chart tell us? There appears to be little correlation between bank stocks and the decline in bank M&A pricing. The NASDAQ Bank Index is actually 12.1% up since the beginning of 2015 while the SNL Southeast Bank Index is down, but not to the degree that M&A pricing is down.

Could there be other explanations for the drop in M&A pricing? Without delving too deep into behavioral finance, it is plausible that general economic and environmental factors are affecting the opinions of potential buyers of what constitutes the “going rate” for selling banks. The prolonged period of extremely low interest rates has not helped. Further, the election season and the recent uproar over the Wells Fargo matter have shown us that certain politicians in Washington are adept at ignorantly casting aspersions on the banking industry as a whole (lumping community banks in with the big banks, by the way) which undoubtedly has a negative impact on M&A pricing.

Bank M&A deal flow and pricing in particular are down in the first nine months of 2016 compared to last year. This is perhaps due to a combination of where bank stocks trade, where interest rates sit and how often politicians recklessly run their mouths. Heading into 2017 we will monitor the marketplace to see if the pricing decline is temporary.