In “Tone from the Top…Bank Secrecy Act Update,” Richard Hills discusses recent BSA developments and sheds light on the important “tone from the top” concept about which all bank executive management should be aware as it relates to BSA compliance.

Richard T. Hills, Esq. is a partner in the Nashville office of Waller Lansden Dortch & Davis, LLP and leads the firm’s Financial Services Group. Porter White & Company is pleased to present his insights on the latest developments with the Bank Secrecy Act.

In its most recent semi-annual risk assessment, the OCC noted that BSA/AML risk is increasing. The OCC noted that technological developments in enhanced delivery platforms for bank products may create new exposures to criminal activity. The OCC highlighted that some banks have reevaluated client BSA/AML risk profiles and closed the accounts of certain higher-risk customers. Displacement of customers because of reevaluation strategies by larger banks may result in the continued on-boarding of higher-risk customers by banks that potentially have less experience with associated BSA/AML risks. Federal regulators expect banks to assess the risks posed by individual customers on a case-by-case basis and implement controls to manage the relationships commensurate with these risks.

The bank, in its response, may provide information relating to the potential noncompliance or the repeat or uncorrected problems. If the bank fails to respond within 15 days of the date of the OCC’s written notice, any subsequent response may not be considered by the OCC. The OCC supervisory office and legal representatives review and consider any information submitted by the bank, along with the examination findings and any other relevant information. Based on this information, the OCC determines whether to pursue an enforcement action.

In addition to a cease-and-desist order, the OCC may also pursue civil money penalties (CMP) when warranted. If the OCC is actively considering a CMP, the OCC issues a 15-day letter to the bank or appropriate institution-affiliated parties. In addition, the OCC notifies FinCEN of all formal and informal BSA enforcement actions. The OCC also notifies FinCEN of potential CMP actions at the time it issues 15-day letters.

A recent decision from a federal district court provides even more reason for compliance officers at financial institutions to install robust anti-money laundering compliance programs. Under the district court decision, chief compliance officers would be personally subject to both civil and criminal liability if their institution’s anti-money laundering compliance programs are incapable of detecting and stopping illicit transactions.
In this case FinCEN, alleged that a former chief compliance officer failed to file Suspicious Activity Reports (SARs) related to transactions he had reason to believe were related to money laundering, fraud, or other illegal activity. FinCEN fined him $1 million and brought action in federal court to collect the fine. The defendant sought dismissal of the fine, arguing that the Bank Secrecy Act applies to institutions, not individuals.

The court disagreed and denied his motion, reasoning that the Bank Secrecy Act’s civil penalties provision applies to “partners, directors, officers, and employees” of financial institutions. No final disposition has been reached in the case, but the district court’s decision makes clear that FinCEN is empowered to impose personal liability on compliance officers.

The imposition of personal liability on chief compliance officers is part of the regulators’ broader interest in compliance failures at the highest levels of financial institutions. On February 18, 2016, the Financial Industry Regulatory Authority (FINRA) sent letters to a dozen financial firms, inquiring about the methods by which the firms establish and maintain a culture of compliance. In addition to requesting general information on the firms’ practices, FINRA specifically requested information on how the firms established a “tone from the top.”

FINRA characterized the request letters as an attempt to better understand how culture affects compliance, but the focus on the “tone from the top” suggests FINRA perceives or is at least particularly concerned about deficiencies among the highest ranking executives of financial firms. 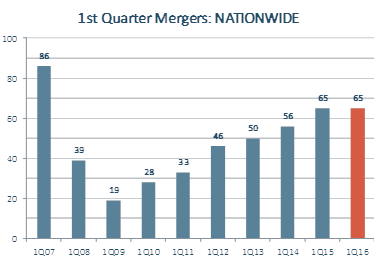 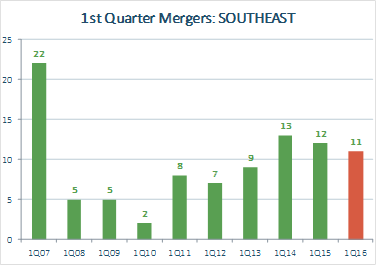 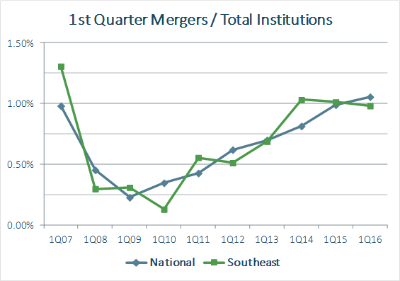 Percentages were calculated by dividing mergers in a given quarter by total institutions at end of the prior quarter. Southeast: AL, AR, FL, GA, MS, NC, SC, TN, VA and WV

What about Deal Pricing? 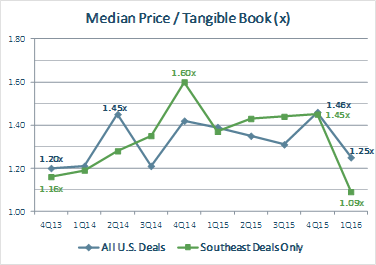 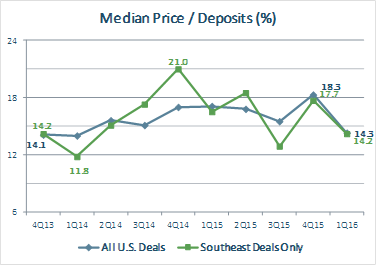 In terms of number of deals, the first quarter of this year was fairly active on a relative basis. Nationally 1Q 2016 was the most active first quarter since 2007 and regionally the quarter was about as active (relatively speaking) as the first quarters in 2015 and 2014.

In terms of deal pricing, the first quarter of this year was “off the pace” compared to prior quarters. However, a single quarter of less than spectacular pricing does not make a trend and 1Q 2016 could very well be an anomaly. It will be interesting to see where deal prices fall in the remaining three quarters of 2016.