Many people save for retirement in a defined-contribution retirement plan (like a 401k) or an individual retirement account (traditional or Roth IRA). It is important to designate beneficiaries for accounts. The forms, often seemingly simple to fill out, have hidden complexity.

You are likely to encounter the words “per stirpes,” which means “by roots” in Latin. In the estate planning context, it means that assets will be distributed along the “roots” of lineal descendants, preserving a bequest to a line of heirs if one person in a generation predeceases the person bequeathing the assets. The opposite would be a default of “per capita,” which would give an equal share to each person in an equal degree of relationship to the deceased (e.g. 3 children). This small checkbox can have meaningful consequences to a family, as explained in the charts below.

Let’s start with a scenario of a matriarch who will leave $300,000 in an IRA to her three children. She also has three grandchildren, although her daughter has no children. In a basic scenario, her three children living at the time of death would split the assets equally and receive $100,000 each. Whether or not the per stirpes box was checked has no impact if all primary beneficiaries are living. (For simplicity’s sake, we are ignoring any final expenses, fees, and transfer taxes upon the disposition of assets at death.)  It is important to note that an IRA beneficiary form will supersede the will. 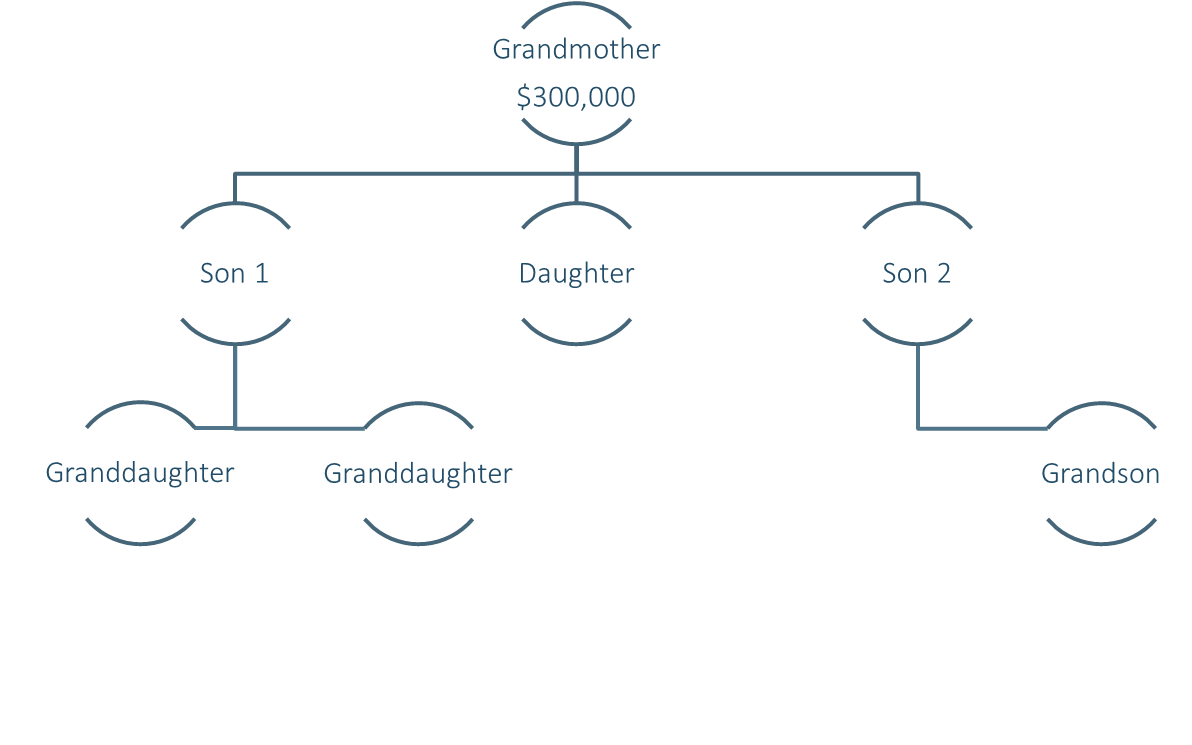 II.    Scenario 1 – Son 1 Predeceases Mother and Per Stirpes is not Elected

The importance of the per stirpes designation becomes apparent when a child pre-deceases a parent. In this first scenario Son 1 has predeceased his mother. The per stirpes designation was not elected. In this scenario, the assets will now be split equally among her two living children, as shown in Figure 2 below. below. The deceased son’s children will not receive their father’s share.

Figure 2: Per Stirpes not Elected 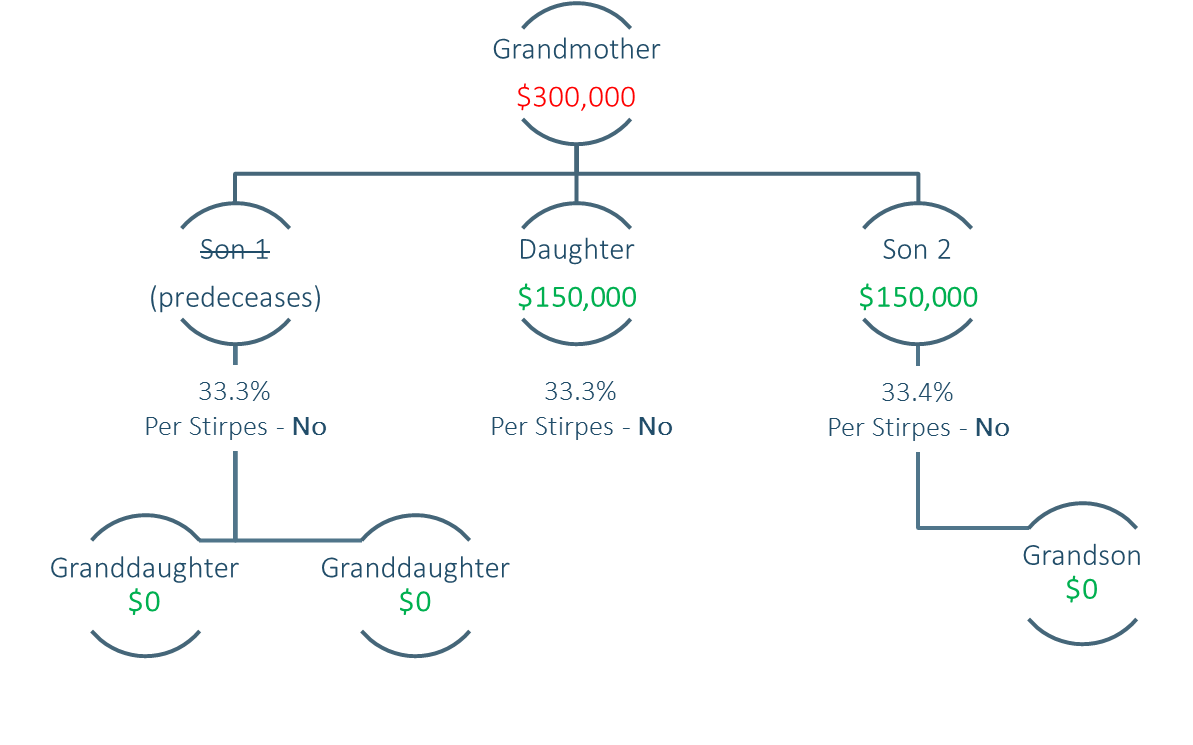 III.   Scenario 2 – Son 1 Predeceases Mother and Per Stirpes is Elected

In scenario 2, Son 1 has predeceased his mother. If the three primary beneficiaries had been designated “per stirpes,” the assets would be kept in lineal descent with Son 1’s share of the assets going to the next generation. His share (1/3 of the $100,000) is now split equally among his heirs, as shown in Figure 3. 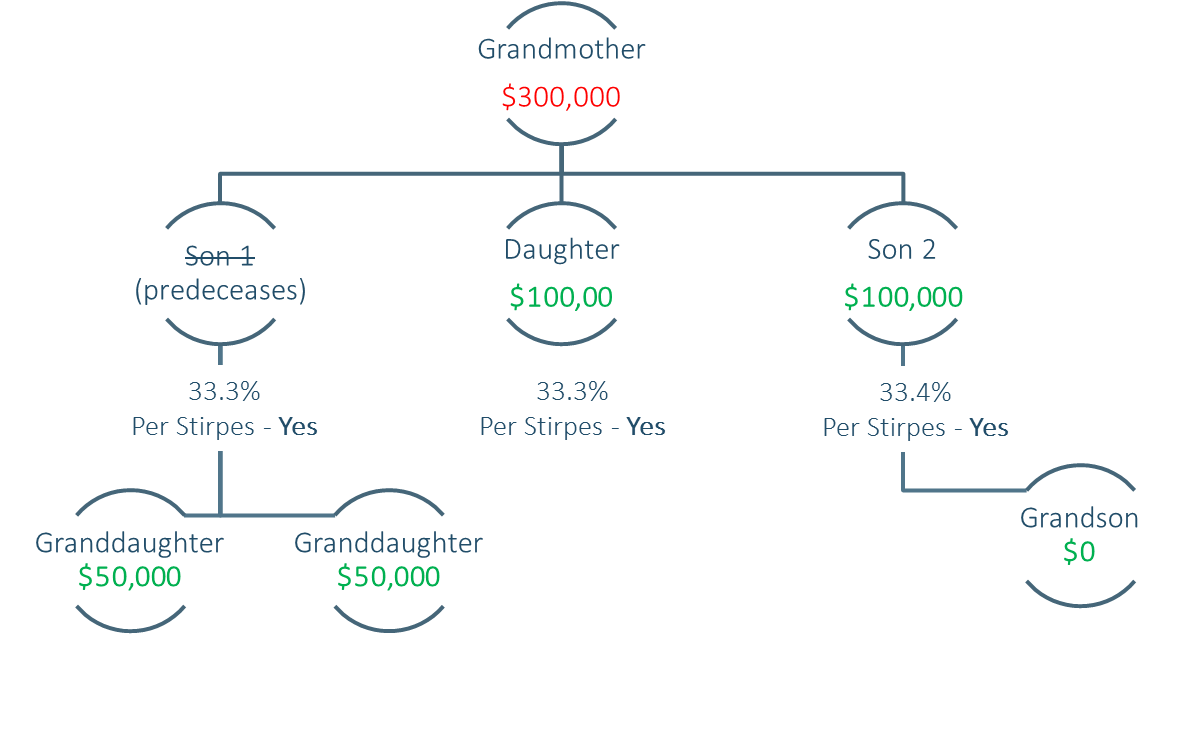 In this scenario, the daughter, who does not have any children, predeceases her mother. Since she does not have children to receive her share of the assets, the total amount will now be split among the two living primary beneficiaries. The per stirpes election does not come into play.

Figure 4: Daughter Predeceases with no Children 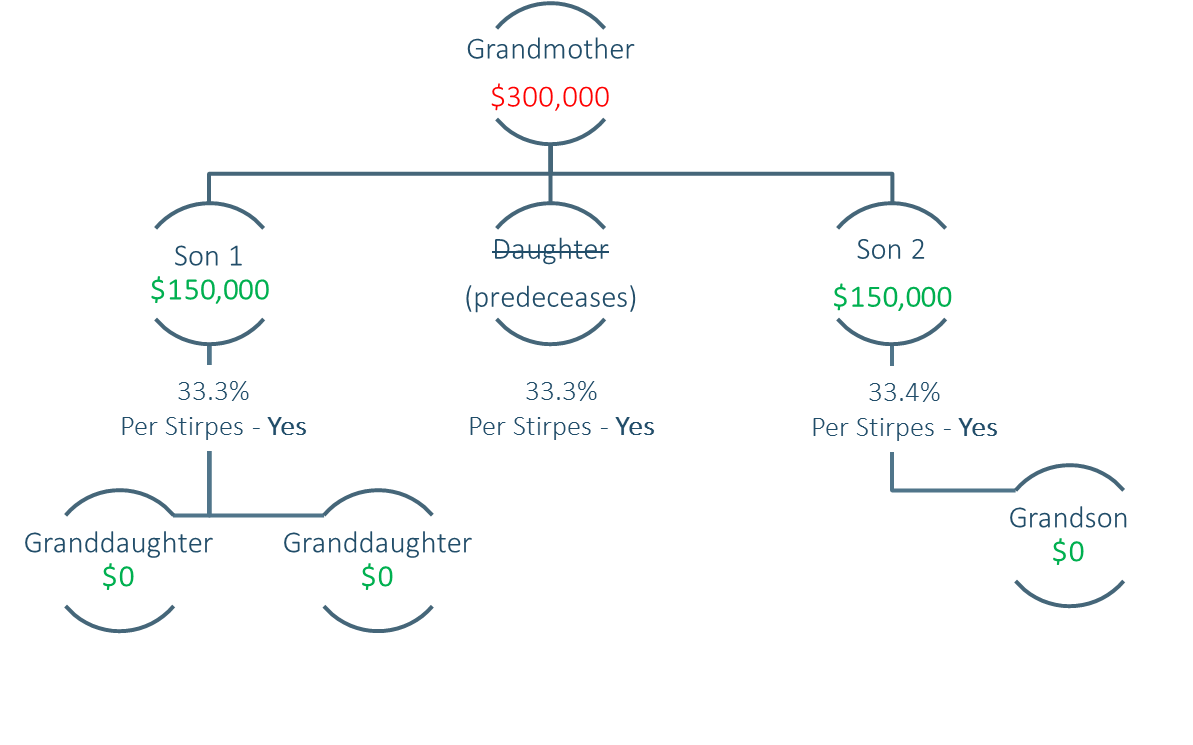 In this final scenario, the daughter, who has a stepchild, predeceases her mother. Generally, unless the daughter’s stepchild was legally adopted, they have no right to any assets left per-stirpes. Resulting in the total amount being split among the two living primary beneficiaries.

Figure 5: Daughter Predeceases with a Stepchild 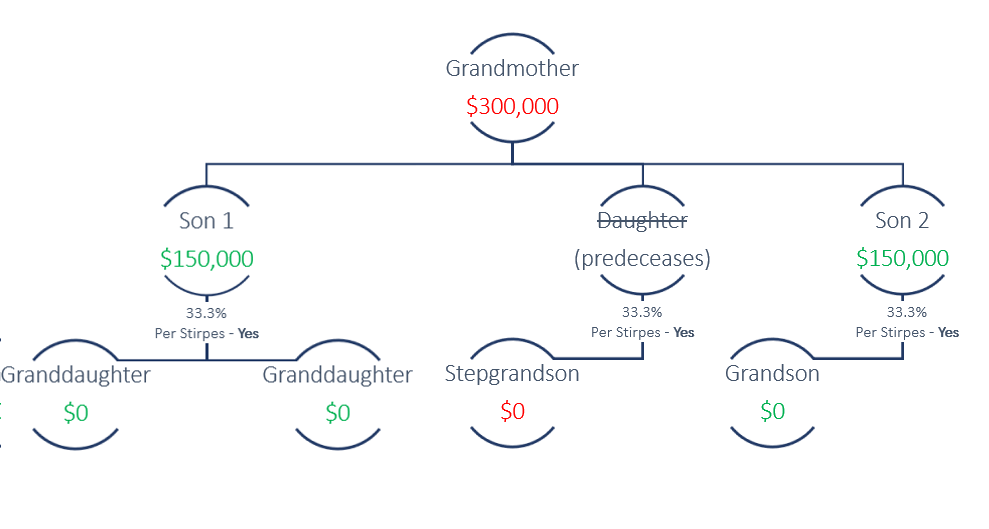 While this commentary is meant to explain the use of the per stirpes designation, each individual or family’s desires may vary, and we have made a number of potentially limiting assumptions. Planning should be done in consultation with an estate planning attorney to ensure that your wishes will be carried out. Also, beneficiary allowances may vary by custodian, retirement plan or state.

[i] Note that while retirement plan assets are distributed outside of probate, they are included in the deceased’s estate for purposes of the estate tax if the estate is of a size to be subject to estate tax.