In our recent investment commentary, we highlighted research regarding plan design and plan participants.  The research clearly highlights the effects that plan design can have on plan participants and retirement outcomes.  While the study largely confirms that automatic enrollment has a strong effect on participant saving and investing behavior, it also alleviates fears that many plan sponsors have in making these elections for employees.  Only ~5% of participants in plans with an automatic enrollment feature made changes to reduce the savings behavior created by those features.  Please reach out if you have any questions regarding the commentary or the plan design of your plan.

One thought concerning automatic enrollment that the researchers addressed is the criticism that plan sponsors can set automatic deferral rates at a level where participants who would have voluntarily enrolled at a higher deferral rate remain at the reduced automatic deferral rate.  The research showed that it is true that the average contribution rate for participants in voluntary plans is slightly higher (Figure 4a), but only the individual participants are considered in this scenario.  If you consider all employees, including non-participant employees who contribute nothing to retirement, outcomes through automatic enrollment are much more favorable (Figure 4b). Additionally, in recent years, there has been a trend among plan fiduciaries to raise the default deferral rate from rates long thought to be low enough to dissuade opt-outs, to something stronger, causing the spread between voluntary and automatic deferral rates over time to decrease. 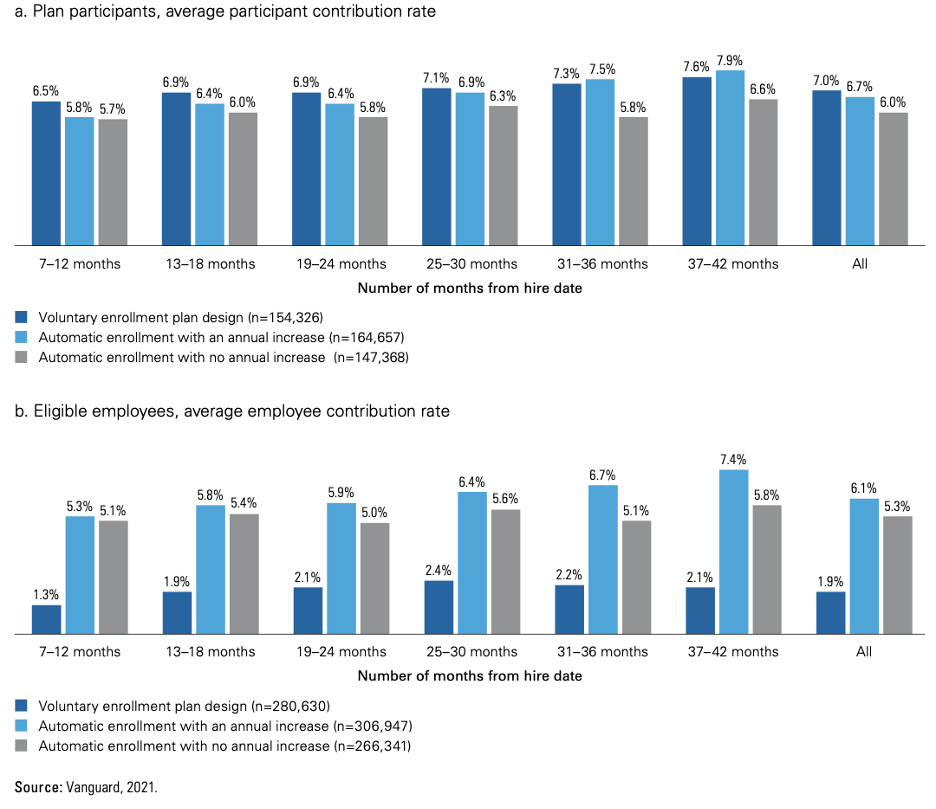 The research clearly highlights the effects that plan design can have on plan participants and retirement outcomes.  Automatic enrollment is one such design that can be critical in improving plan participation and saving rates amongst employees.  The data shows higher participation rates compared to voluntary enrollment, and higher retirement savings rates when considering the replacement of non-contributors with contributing participants.  Practical discussions should be had when considering the automatic deferral rate associated with automatic enrollment.

Plan design is obviously not a one size fits all solution, so work with an expert to help determine what works best for your plan, because productive default designs can improve retirement outcomes for employees.

(a) Past performance is not a guarantee of future results.
(b) There is no guarantee that an investment strategy will be successful.
(c) Investing involves risks including possible loss of principal.
(d) This article is distributed for informational purposes, and it is not to be construed as an offer, solicitation, recommendation, or endorsement of any particular security, product, or service.

[i] https://institutional.vanguard.com/iam/pdf/ISGAE_022020.pdf
[ii] The research is spans across 520 plans, specifically concentrating on newly hired eligible participants who were hired between January 1, 2017 and December 31, 2019, and are still employed as of June 30, 2020