We are pleased to present “Addressing Activist Shareholders” by Robert Klingler with Bryan Cave LLP. Klingler explores how banks can manage the delicate issue of activist shareholders.

In “The Long and Winding Road…First Half 2015 Bank M&A Scorecard,” we review the merger marketplace and look for clues to understand the forces currently affecting bank M&A.

This article appears courtesy of Robert Klingler. Mr. Klingler is a bank regulatory and merger partner at the Bryan Cave LLP law firm in Atlanta, Georgia.

Across the country, we are seeing an increasing number of shareholders of community banks expressing discontent with their returns on investment. The financial sector has been a poor performer so far in 2015 and community banks continue to lag the performance of their larger brethren.

As a result of low community bank profitability and growth, we believe banks need to be prepared to address increased shareholder activism. Even long-time shareholders may lose patience and demand changes. Alternatively, professional investors may take a position in the bank and use every resource available to change the bank’s strategic direction for purposes of short-term profit. Either category of activist shareholder can present significant challenges to your bank’s board and management team.

Having shareholders that care about the performance of the bank is a great thing. But a disruptive activist shareholder can easily derail long-term strategic plans, create a significant distraction to the bank, lead to a waste of bank resources, and otherwise harm other shareholders. Accordingly, banks need to be ready to address shareholder activism.

What should your bank do in light of the increased odds of shareholder activism? Some wise steps for all banks are listed below.

A shrewd response does not happen by accident. Your bank’s management team and board should thoroughly discuss and periodically revisit a plan or process for properly responding to activist shareholders. While the plan will necessarily be open-ended given the variety of potential activist overtures, having a plan and documenting responses in line with the plan greatly enhances decision-making and reduces liability and litigation risks.

A plan should also include a careful review of the bank’s corporate governance documents (e.g., charter and bylaws) to determine if they optimally allocate responsibilities and provide appropriately-tailored rights. Most analysis done by community banks on this issue is outdated or incomplete, if it has been done at all. Some of the governance provisions that bear particular focus are those dealing with special meetings, shareholder action by written consent, removal of directors and advance notice of shareholder proposals.
Having a plan has numerous benefits, including helping manage emotions, a key challenge in an activist situation. Activist shareholders often use harshly critical language that is perceived as (and often is) personal, unfair and exaggerated. In turn, management is predisposed to react in kind or simply ignore such shareholders as misguided or malicious. However, research suggests that management teams and boards who can manage their natural emotional reaction and objectively consider the ideas being presented can take action that benefits the bank and increases shareholder value.

Every bank should select a team to respond to activist demands, including members of senior management and the board of directors. Ideally, this is done before any activist situation arises. Management must be able to evaluate the full range of business and legal risks and options and ensure that the board fulfills its fiduciary responsibilities. It is wise to involve counsel that understands corporate governance, securities law issues and how an activist overture would be viewed by your bank’s regulators.

In addition to the above broadly-applicable recommendations, below are suggested responses to specific shareholder actions.

Pressure to sell the bank.

Industry experts say that “banks are sold, not bought,” meaning that the impetus for a sale comes from within. If a bank cannot deliver returns that at least meet its cost of capital and it looks like the disappointing performance will continue, shareholders may demand a sale or at least increased dividends or share buybacks. Shareholders have a good argument in such circumstances that their equity should be freed for more productive purposes. Banks are deciding to sell even though (or perhaps because of) a perceived lack of substantial franchise value. Every bank is different and your bank should regularly revisit the decision of whether to “buy, sell or hold” so that this analysis is fresh and ready to use in responding to an activist.
Pressure to appoint an activist director. One of the most common goals of shareholder activists is gaining a seat on the bank’s board of directors. Such a candidate usually has a good argument that his or her interests are strongly aligned with the bank’s shareholder base. Of course, a bank has more stakeholders than a nonfinancial firm, including depositors, debtholders and regulators. Banking law and regulation impose high minimum standards on all board members. Thus, it takes serious analysis to determine if a candidate is eligible to sit on the board. Deciding whether the candidate has the necessary integrity, discretion and competence is even harder, particularly when the proposed director has narrow agenda such as forcing the bank to sell itself or to pay dividends. Having a response plan with a checklist of criteria ready to use makes this analysis much easier.

In addition to the demands already described, activists may ask for a range of changes to your bank’s governance structure. Such changes can include demands to hold annual elections for all directors instead of staggered board terms. Activists may ask to split the roles of CEO and chairman. They may also ask for changes to the bylaws to change notice periods for shareholder proposals or to remove local residency requirements for directors. A bank can best prepare for these sorts of demands by having an up-to-date analysis of its governance structure and how that structure aligns with the bank’s strategic direction. Finally, while the views of shareholder advocacy groups on governance issues do not dictate bank policy, your bank should be aware of those views as it formulates its overall plan for responding to shareholder activism.
An activist shareholder is like a final exam. Every bank should study the likely issues and engage constructively with the activist. Although stressful, if the process is properly managed, the bank can avoid costly litigation and emerge stronger.

The bank and thrift M&A arena continues its slow march back to pre-recession activity as 74 deals were announced nationwide in the second quarter. This represents an increase over the 67 deals in the first quarter 2015 but is slightly below the 76 deals announced in second quarter of 2014. In the first six months of 2015 there were 141 deals announced, the highest first half total since 2007 (156 deals).

Deal activity in the first half of 2015 rose to levels not seen since the crest of the last M&A wave in 2007. 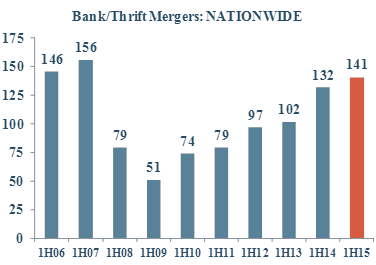 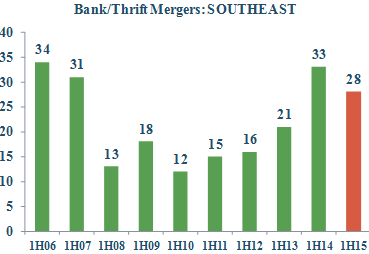 Nationally and regionally, deal pricing has recovered from the low points four to six years ago but clearly continues to trail pre-recession valuation levels when looking at Price/Tangible Book multiples or Price/Deposit multiples. Interestingly, pricing for deals in the Southeast currently exceeds pricing for deals nationwide; this follows several years through the recession of Southeastern deal pricing lagging national pricing. 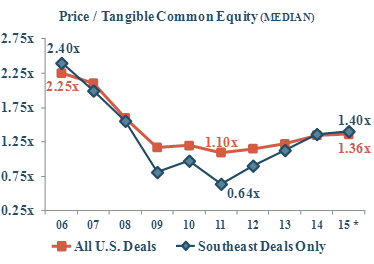 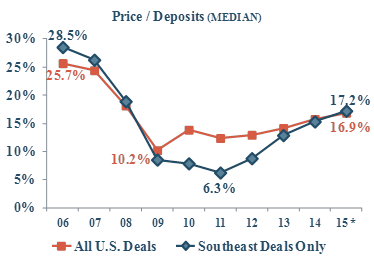 * 2015 is the first half only. Note: Price-Earnings multiples not shown due to the abnormally high preponderance of sellers with little or negative earnings in the 2009-11 period.

The much ballyhooed return of the M&A tidal wave may have been prematurely predicted by some in the punditry. While the number of and pricing on deals make a slow march back to pre-recession levels, the much anticipated M&A boom has yet to materialize.