During the CNN Republican Debate on September 16, 2015, the top eleven (yes, eleven) hopefuls for the party’s nomination spoke to policy issues, personal achievements, and of course, the shortcomings of others. When the topic shifted to the economy and job creation, Carly Fiorina, in response to criticism from Donald Trump, stated that she “led Hewlett-Packard through…the worst technology recession in 25 years…doubled the size of the company, quadrupled its top-line growth rate, quadrupled its cash flow, and tripled its rate of innovation.”

Let’s quickly examine the evidence behind Mrs. Fiorina’s statements. Hewlett-Packard appointed Carly Fiorina as its CEO in July 1999, just prior to the collapse of the tech bubble. She led the company, including its acquisition of rival Compaq, until her forced resignation in February 2005. The Compaq deal was ultimately carried out in May 2002 after a fierce proxy fight, with opposition led by Walter Hewlett, son of HP co-founder Bill Hewlett.

Although investors generally think of ‘size’ as market capitalization or net worth, Fiorina’s comment on doubling the ‘size of the company’ was referring to its revenues. According to HP’s 10-K filings, its revenues in fiscal 2005 were $87 billion, compared to $42 billion in fiscal 1999. So, the company’s revenues did indeed double during that timeframe; however, let’s not neglect the significant impact of the Compaq acquisition.

Prior to the transaction, HP had $45 billion in annual revenues, while Compaq had $33 billion. HP’s all-stock acquisition of Compaq resulted in the issuance of 1.1 billion shares of common stock and a total cost of $24.2 billion. Therefore, while revenues certainly increased, so did the investor base to which those revenues had to yield a return. The following chart shows HP’s revenues from 1999-2004 (blue series), with Compaq’s revenues prior to the merger (green series) overlaid to demonstrate those of the combined company. 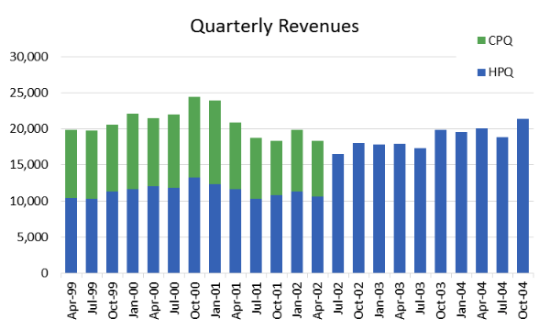 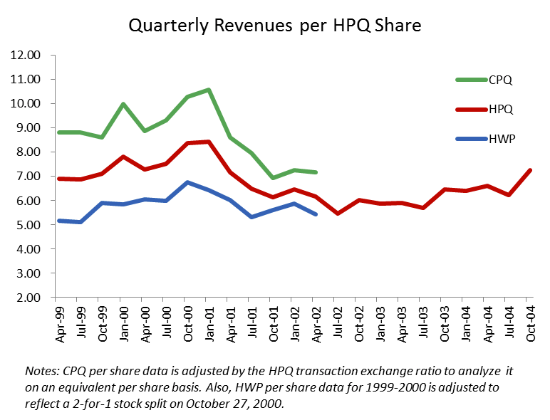 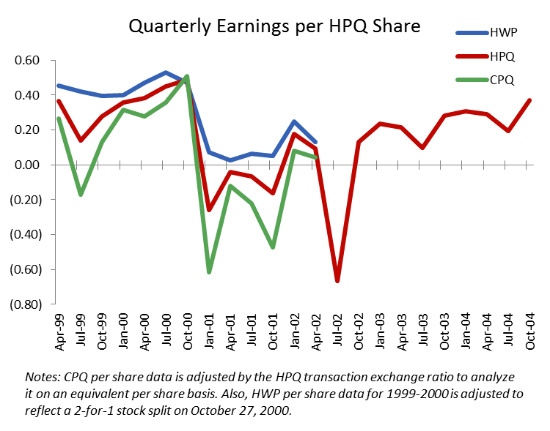 What gets lost amid all the fact checking and campaign rhetoric is the real impact of the transaction and what can be learned from its aftermath. With the issuance of 1.1 billion new shares, HP effectively sold 37% of its business to Compaq—that is how M&A transactions work. At the time, HP’s Printing segment maintained significant market share and accounted for substantially all of its operating profits (on 43% of its revenues), while its Computing and other segments struggled to breakeven. So in essence, HP, with Carly Fiorina leading the charge, made a $24 billion bet on the personal computing market at the expense of its most profitable business line.

It is worth mentioning that Fiorina was hired at HP partly to revitalize a stale company. In 2000, she attempted to acquire the consulting arm of PwC, although the bid was rescinded after Board and shareholder displeasure. The PwC acquisition did have strategic long-term value, although shareholders should remain happy the deal was quashed, as in a post Sarbanes-Oxley environment IBM closed the PwC deal in 2002 at a fraction of HP’s offer.

It is not unreasonable to think that the Compaq deal might have been a reaction, driven by ego more than logic, to the failed PwC bid. Doing a deal for the sake of doing it, or growth in absence of sound analysis of the benefits (and risks), are problematic strategies. I am curious, then, if Fiorina’s track record at HP, with chronic internal conflict and occasional hubris, reflects the leadership and consensus-building traits needed as President.