The charts below show a snapshot of local report findings. Local data is shown from December 31, 2018 to December 31, 2019. The relative performance compared to national trends is presented using data through September 30, 2019 (rather than December 31, 2019) due to a lag in the national data.  In summary, the Birmingham economy continues to improve, as evidenced by continued growth in three of the five categories below; however, the Birmingham area still lags regional peers. 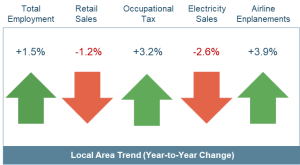 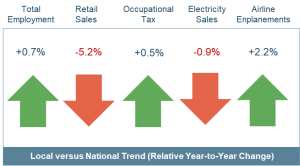