This is the eighth edition of the Porter, White & Company Birmingham Area Economic Report, which is published quarterly. The report places the Birmingham area economy in a state, regional and national context, and focuses on the following statistical series: (A) number of people employed, (B) retail sales, (C) occupational tax collections, (D) airport enplanements and (E) commercial and industrial electricity sales.[1] Each series is sensitive to changes in economic conditions as evidenced by historical declines during and after national recessions; each has analogs at the city, county, MSA, state or national levels; and each is available reasonably soon after the end of the applicable month.

The charts below show a snapshot of local report findings. Local data is shown from March 31, 2015 to March 31, 2016. The relative performance compared to national trends is presented using data through December 31, 2015 (rather than March 31, 2016) due to a lag in the data. Changes in retail sales and occupational tax collections are calculated in constant dollars (net of inflation). If calculated on nominal dollars, percentage changes would be different. 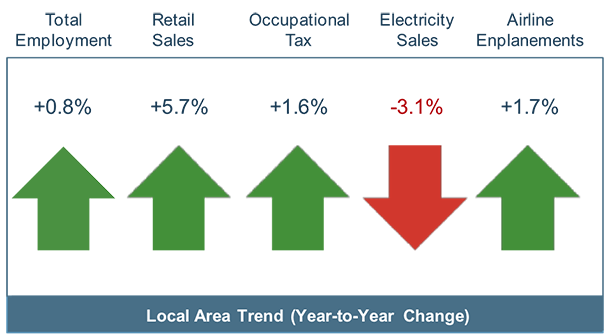 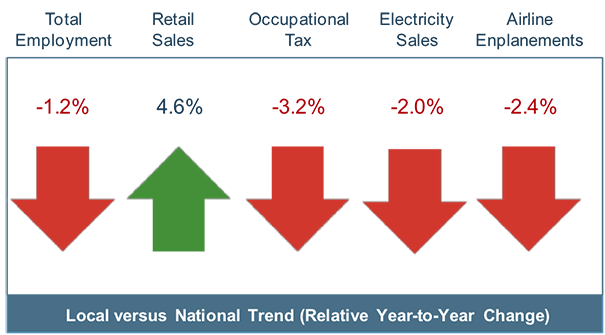 The Birmingham economy continues to improve steadily, as evidenced by continued growth in four of the five categories above; however, the Birmingham area and the State of Alabama have not quite recovered from the Great Recession as measured by number of persons employed pre- and post-recession. The data underlying the charts is discussed in greater detail in Section IV of this report. To avoid getting lost in a sea of numbers, Sections I, III and IV of this report concentrate on the same set of statistics every quarter. Section II presents additional discussion and economic statistics that will be reported less frequently.

Growth in jobs is the most important economic indicator. Job growth leads to increased family income, in-migration of population, larger tax revenues without increasing tax rates, and economic well being. Preferably new jobs are well paid, in stable industries, and generated by businesses with good and stable market position. Alabama and the Birmingham-Hoover MSA have been recruiting jobs, but they have been losing them faster than they have been gaining them. Losses have been particularly severe in high value added mining and manufacturing. Job numbers in this report come from the Bureau of Labor Statistics via the FRED database maintained by the Federal Reserve Bank of St. Louis. While there is always the possibility of error in economic statistics, material error is less likely where, as here, the numbers are gathered over a long period of time and are made available for peer review by economists and the public.

Employment, and the change in number of people employed, is the most important indicator of the health of an economy. People move or return home to a place that offers them meaningful jobs. The chart below is sorted based on total employment growth over the last 10 years from April 2006 to March 2016 (Austin – largest growth, Montgomery – smallest growth).

As shown in the figure below, the state of Alabama has lagged all other 49 states in total employment growth over the past 10 years from April 2006 to March 2016. The chart is sorted by total employment growth since April 2006, moving from left to right down the legend (largest – North Dakota, 2nd largest – Texas, smallest – Alabama). The states that are listed in red have not reached April 2006 employment levels. All five of these states are separated by less than 1%.

In an effort to provide timely access to local and national economic data, we have updated our report to provide comparative national statistics to local economic indicators on a one quarter lag. This section places the Birmingham area economy in a state, regional and national context, and focuses on the following statistical series: (A) number of people employed, (B) retail sales, (C) occupational tax collections, (D) airport enplanements and (E) commercial and industrial electricity sales.

As of December 31, 2015, the number of people employed in the United States had recovered to the previous high level (although the percentage of population in the labor force was still at a post-recession low). In the Birmingham-Hoover MSA and the State of Alabama, however, the number of people employed has not reached full recovery, and the rate of growth is lagging be-hind the U.S. as a whole. 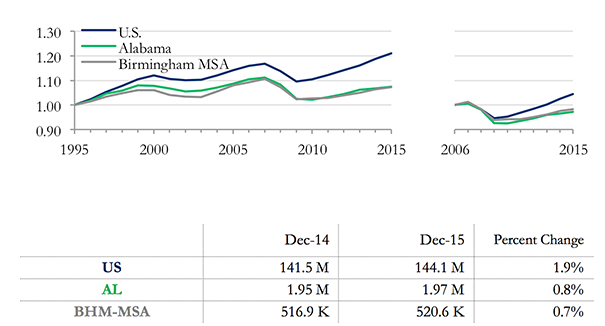 Retail sales are important in Alabama as a sign of economic activity and an important source of governmental revenue from sales taxes. For the recent 12 months period, Alabama, as well as Jefferson County and Birmingham MSA, have outpaced the rate of growth of the U.S., using personal consumption of durable and non-durable goods (omitting personal services) as the analog for U.S. sales. Retail sales in the City of Birmingham remain below 1994 levels, while Jefferson County retail sales are just below 1994 levels. According to the data, Jefferson County shows a very high growth rate over the past twelve months, but it should be noted that some of the growth can be attributed to uneven collections that may not be representative of the actual time period. Unofficial estimates are closer to the growth rate of the state. 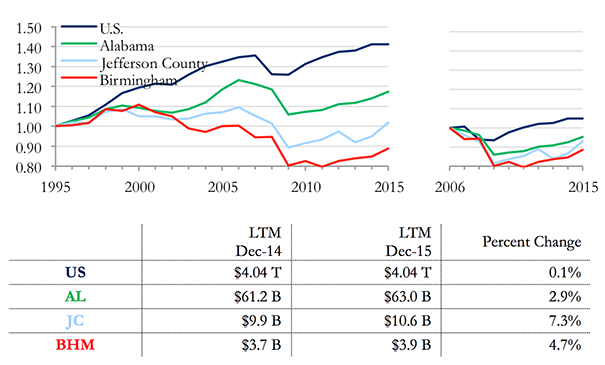 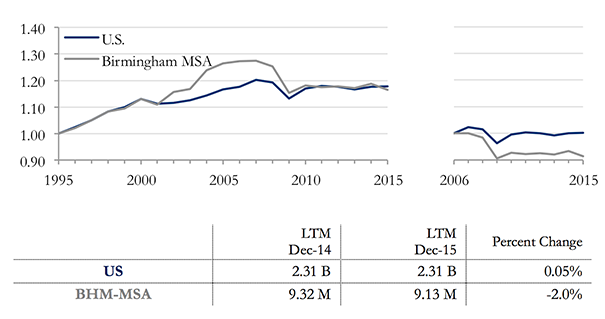 Changes in the selected statistics over the last two years (ending December 31st) are summarized in the graph below.

We publish these statistics with the expectation that they will draw comment and constructive criticism, which are both welcome.