In “The Ol’ Pea Under the Shell Game,” former Alabama Speaker Pro Tempore and guest author Bobby Tom Crowe discusses money laundering in part one of a two part series.

The first half of 2017 is in the books and the bank M&A world is gathering steam as both the number of deals and transaction prices are up. 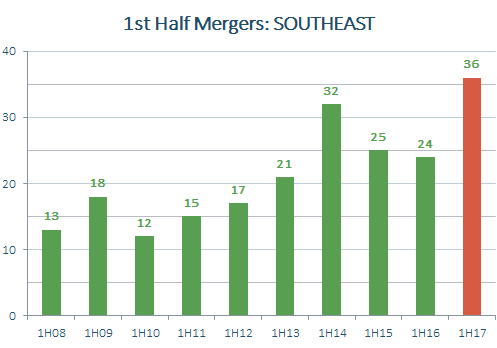 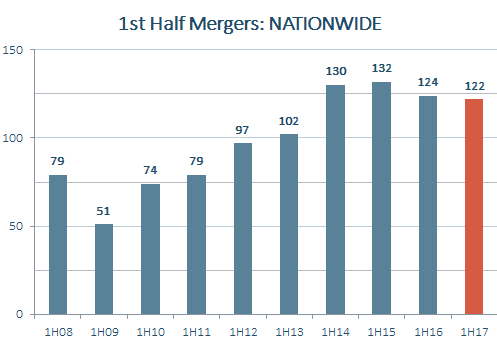 While deal activity nationally was flat in absolute terms compared to 2016, keep in mind the number of total banks continues to dwindle which means that in relative terms deal activity nationwide (and especially in the Southeast) is up. The following chart shows how the number of bank mergers as a percentage of total banks is on the rise both nationally (blue line) and regionally (green line). 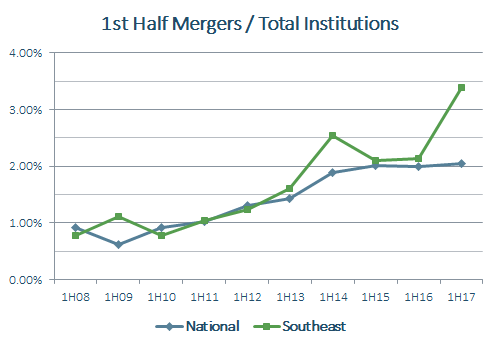 Percentages were calculated by dividing mergers in a given first half by total institutions at end of the prior year.

Not only did deal activity take off in the first half, but so did deal pricing. The following two charts show pricing over the last 20 half-year periods, which encompass the Great Recession and its aftermath. While not completely rebounded to pre-recession levels, pricing in 1H 2017 was the highest both nationally and regionally since 2008 and well above the basement prices seen in 2011. For instance, the median Price/Tangible Book in the Southeast in 1H 2017 was 1.65x (green line in the first chart), which is the highest we have seen since the first half of 2008 when the median was 1.92x. 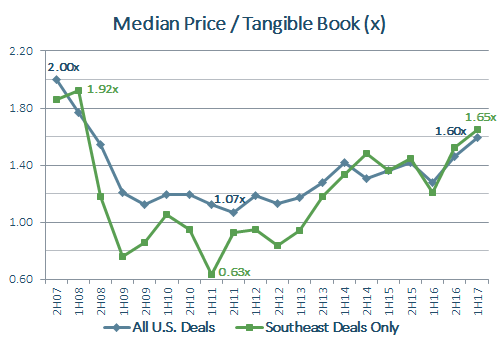 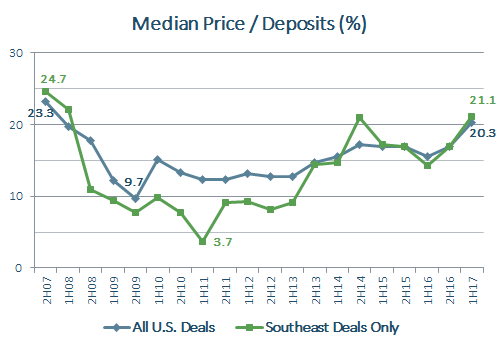 What Explains the Surge in Deal Pricing?

What is behind this noticeable rise in bank M&A pricing through the first half of 2017? While there are a multitude of potential factors, one explanation might be found in looking at the correlation of bank stock prices and bank M&A prices, particularly in light of the phenomenon known as the “Trump Bump.”

The following chart looks at both bank stocks and M&A pricing on a national basis over the last ten years. Bank stocks are represented by the NASDAQ Bank Index in the blue line. It is indexed at zero beginning on June 30, 2007. The green line shows the median Price/Tangible Book pricing for all U.S. bank M&A transactions over the last ten years. The data points are medians for each half-year period. 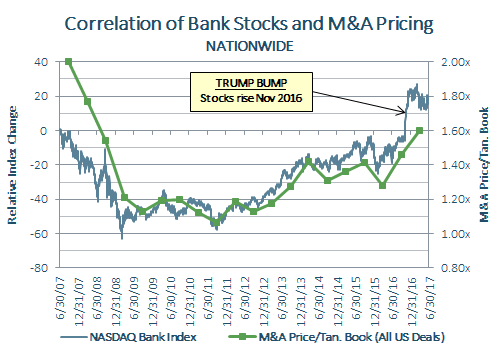 M&A pricing are the median Price/Tangible Book values for each half-year period.

NASDAQ Bank Index comprised of all NASDAQ-listed banks in the United States.

After almost 10 years of trading below pre-recession levels, the NASDAQ Bank Index was up 19.2% as of June 30, 2017, and most of the gains were made in November 2016 when the line turned vertical around the time of Donald Trump’s election. Bank M&A pricing (green line), which had a median Price/Tangible Book of 2.00x in 2H 2007, has largely tracked bank stock prices over the 10 year period and also had a spike following the Trump election, so that the median Price/Tangible Book in 1H 2017 was 1.60x. The data imply a fairly strong correlation between bank stock pricing and bank M&A pricing.

In terms of deal activity as well as deal pricing, bank M&A in the first half of 2017 reached heights not seen since before the Great Recession. Maybe some of this is attributable to the sector’s favorable inclination to Trump’s election, or perhaps the industry has simply shaken off the lingering effects of the recession. If your institution is a buyer or seller at some point in the future, keep in mind that the great unknown is if the upward trend in deal flow and pricing will continue or if we are due for a downward correction.

Please visit our Community Bank page to learn more about how Porter White can help meet your bank’s M&A and other needs.

The Ol’ Pea Under the Shell Game

We are pleased to present part one of a two-part series by guest author Bobby Tom Crowe, a governmental affairs and economic development consultant based in Birmingham, AL. Mr. Crowe was a member of the Alabama House of Representatives from 1970 to 1978, representing parts of Walker and Winston Counties. He served on the very first banking committee in the Alabama House and was Speaker Pro Tempore from 1974 to 1978. Mr. Crowe’s views are not necessarily those of Porter White & Company.

Since the early days of our young nation we have looked to government to preserve security and integrity. The political arena has been the venue for many debates leading to legislation and banking laws passed by Congress. State legislatures have not been absent in the great banking debates and political battles. From the early struggle between Federal Government Chartered Banks and State Government Charted Banks, we still look to “Government” to preserve and protect the American Banking System.

The debates focused on branch banking, broader ranges of bank-offered services, and products seem to be in the long passed. Customer-centered management has been replaced by more internal management problems. Meeting the demands of the financial regulators has become more important. Add to this the challenge to deliver healthy profits to the investors and you have a very pressure-filled environment for bank management. Adding to the pressure are many problems that have come with international banking and the very rapid of moving money globally.

The geopolitics that is sweeping the world is bringing great concerns and demands to protect the integrity of all financial institutions. The age of instant electronic communications along with the evolving computer science is moving money globally by and between small banks and large regional banks. The “Ol’ Pea Under the Shell Game” is alive and growing in the form of money laundering. This issue is front and center for the worldwide banking industry. Today the community banks are just as vulnerable to money laundering schemes as the large big city banks. When an audit exposes money laundering transactions, criminal charges and big fines are very common which lead to reputational and public relations damage and eventually to falling stock prices.

After recent meetings with key members of Congress and high ranking Banking Committee staff counsel, the issue of money laundering and legislation to address the issue will be a top priority. This issue is considered a national security problem. “Dirty Money” is fueling gang crime, drug markets and terror worldwide. The need to find workable and affordable solutions must be found and installed immediately. As bankers, financial institutional managers, and bank investors it is imperative that the fight is joined immediately to stop the “Ol’ Pea Under and the Shell Game” and the money laundering game.

Part two of this two-part series will appear in the next issue of The Bank Shot.