This report explores a few key statistics that paint a picture of the Birmingham area economy. This is the tenth edition of the newly reinstated Porter, White & Company Birmingham Area Economic Report, which is published quarterly. The results in this report are the best of the reports we have published thus far.
Click here to download the full report with a more in-depth look at the statistics.

The chart below shows a snapshot of findings for the last twelve months from September 30, 2015 to September  30, 2016. In summary, the Birmingham area economy continues to show signs of positive growth, as evidenced by improvement in three of the five categories below; however, the Birmingham area continues to lag behind the national economy and comparable metropolitan areas. 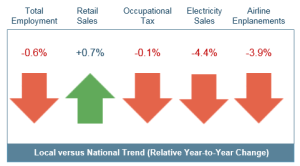